Organizing the archives a top priority

Ambiguity may be the theme of this issue of Hidden Leaves, but leaving things open to interpretation is no way to catalog and store a life’s work — especially that of an artist as prolific and accomplished
as James Hubbell.

Thanks to a recent grant from the Szekely Family Foundation in San Diego, archivist Laurel Costa has made great progress on seeing that thousands of Jim’s works will eventually be catalogued digitally as well as physically—protected as best as is possible from damage
by humidity (foxing), insects, mice (a problem in the mountains), fire, and any other depredations.

The famous food writer M.F.K. Fisher once said, “It’s really fine that you found a good archivist to do the basically difficult and at times harrowing work of cleaning out old papers. I hope you keep her digging into all the old boxes as long as there is ONE left.”

Jim’s watercolor from his trip to install the doors. He has not seen them since, nor has anyone except the royal family, to our knowledge. Otto Rigan’s photos serve as a priceless record in our archive.

Archives are treasure troves. Archives help graph the biographical timeline of a life’s work. Archives open a serendipitous portal to surprise, just as the old card files in libraries used to lead us to yet another book that was even more interesting. And, of course, archives preserve.

Throughout his lifetime, like most artists, James has certainly done a good job of preserving his works that were not sold (all the way back to childhood!), and kept good records and photographs of many that did. When the great Cedar Fire of 2003 swept over Ilan-Lael, it burned the home of Jim and Anne and several studio buildings and a storage container filled with photographs, artworks, and documentation. Despite this tragedy, Jim and Hubbell Studios have been so prolific that new archival efforts have become critically important. 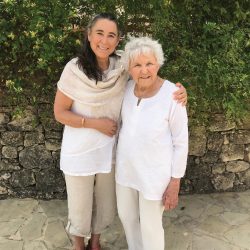 “I was astonished when I saw the breadth of his work on a recent visit,” said Deborah Szekely, “stored in flat files and store rooms but not completely catalogued. Scholars and curators will want to access these artworks for centuries to come.”

Like the prodigal son, some Hubbell works reappear after many years. Recently, author-photographer Otto B. Rigan gave Ilan-Lael his photographs that went into the book, “James Hubbell’s Palace Doors of Abu Dhabi.” These 18 bejeweled doors are certainly his masterwork, and they were created by Jim and a crack team of art and crafts men and women in the unbelievably short time span of only six months! Rigan’s book is the only record of the doors that exists: no one except the highly private owners have seen them since they were boxed and shipped by air to Abu Dhabi in 1981.

Why are archives important? Perhaps the look on James’s face when he first opened the boxes from
Mr. Rigan said it all: wonder — sheer wonder — at all that has been accomplished, will be, and will now never be forgotten in Ilan-Lael’s and Jim and Anne Hubbell’s lifelong quest to help future generations realize the many ways art and nature, joined as one, make magic happen.

You can help! Additional donations are needed to fully match the Szekely Archive Grant. Please earmark your donation to the archive project. In addition, if you own an artwork by James Hubbell, please let us know so we can add its photo and title to the record of his life’s work. archive@ilanlaelfoundation.org