A Conversation with Cindy Mushet-Shriver at Hubbell Studios 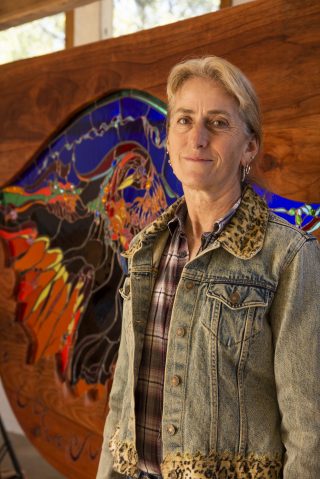 Recently, I sat down with glass artisan Cindy Mushet-Shriver in the Hubbell Studios stained glass loft. She stretches across an eight-foot table of vivid red and blue glass as we chat about her forty-plus years working for James Hubbell, a local artist who has been in the Julian hills since 1958.

Cindy uses horseshoeing nails to tightly fit together glass pieces that make up a massive phoenix also known as The Firebird, currently part of James Hubbell’s  exhibit “In Harmony With Nature” at Helms Bakery District in Los Angeles. This stained glass commission that was originally designed and constructed at Hubbell Studios in 1982 has recently been resurrected when the original piece burned in an arson fire in early 2021. It is embellished with a ten-foot hand-carved wooden frame being crafted by another studio artist, Dan Thoner. The firebird design resonates with Cindy as its original version was being built at the start of her apprenticeship with Hubbell Studios when she was only sixteen years old. I watch Cindy add a lead channel that will give the piece strength, her techniques are so practiced she makes this extremely challenging project look effortless. The passage of time is palpable as she reflects on the original window construction and the firebird origin story.

James was inspired by a book he read in the 1960s,  Land of the Firebird: The Beauty of Old Russia, by Suzanne Massie. He says that this single book changed the way he thought about Russia and led to many pivotal experiences in his life. Based on this inspiration he designed a huge firebird; and with help from his team of studio craftspeople, primarily Mayme Kratz and Otto Rigan they built and transported the Firebird to Findhorn, Scotland. James knows that to complete projects as grand as these he has to find, and collaborate with, a team. Fortunately, he has a knack for finding talented people to come work from his remote home and studio. Cindy is no exception, she and James make a stellar team. James’ non-traditional designs paired with Cindy’s fearless work ethic have resulted in decades of stunning stained glass art being commissioned nationally and internationally. 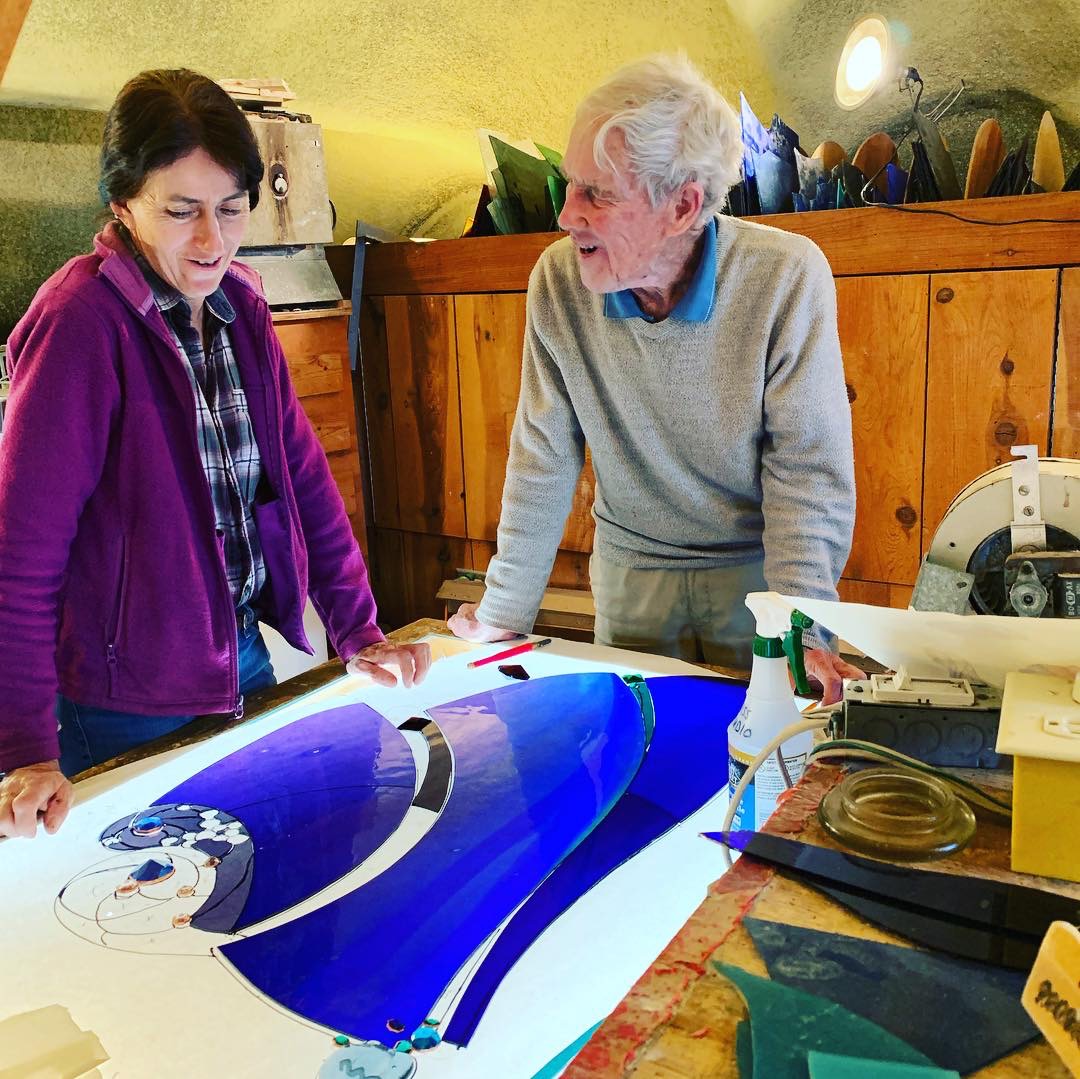 I asked James about his 40-year relationship with Cindy…

“It has been a pleasure to work with her and know her for so many years. She is an amazing person and craftsperson. Hopefully, she will find an apprentice to pass on her skills to.”

The role of expert stained-glass artist however is only one facet of the talents and passions that make up Cindy’s renaissance life: dancing, bats, animal rescue, exotic and endangered birds, and horse racing are all a part of her long history in Julian.

What drew you to seek out stained glass work artisanship when you were just 16?

My mom is an incredible artist, seeing what she created raised my interest in art. I became artistic because of her, I drew a lot, and I liked to create things. But it was my art teacher in high school who encouraged me to come up to see Jim. I was actually more mechanically inclined because of my dad [Cindy’s dad, Buzz, was a master mechanic] which is why I learned to solder at a young age. I liked putting things together. The three dimensionality of stained glass was more appealing to me than painting pictures. Building stuff and playing with light was really interesting.

James and Cindy connected over their love of horses. They both exercised polo horses in their youth and deeply admired horses for their beauty and intelligence. James used to ride his horse, Rosie, named after Rocinante, the horse from Don Quixote, through the hills down to Santa Ysabel before there were many of the fences you see today. Cindy on the other hand  was fixated on racing and became a jockey. 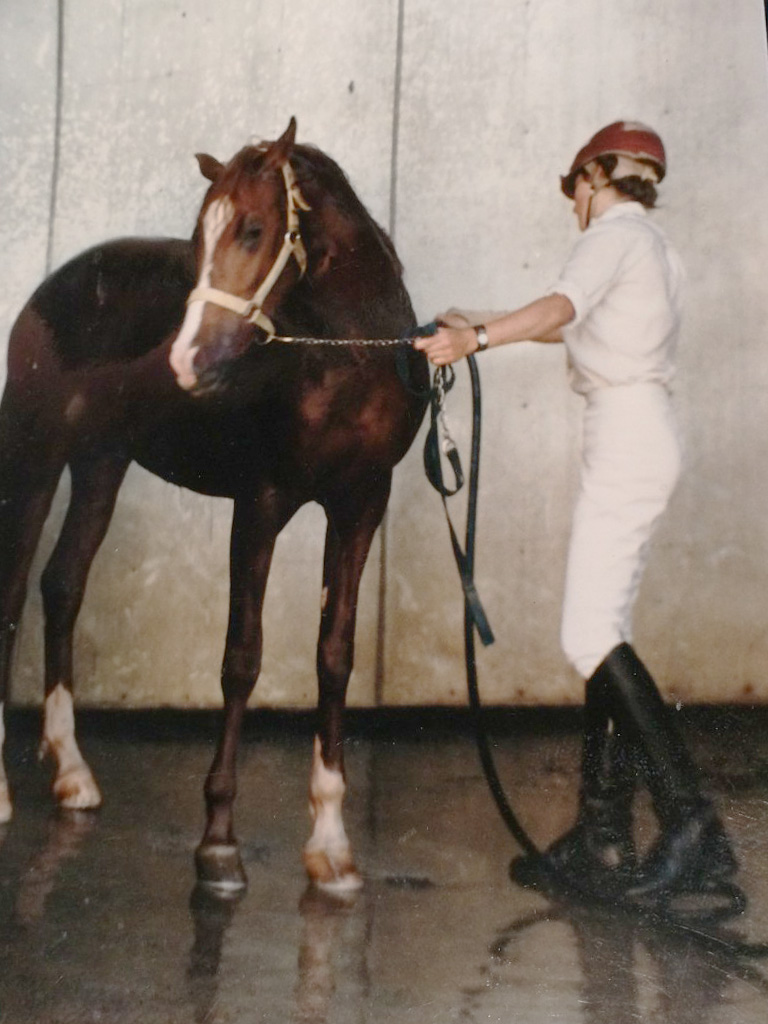 I started racing really young. I like horses and speed. Every time I got injured, I went back to school. James encouraged me to go to school but he said don’t take any stained glass classes; take something else. [Hubbell found that formally trained artists were not always a good fit for his non-traditional windows] If Jim told me to do something I would just figure out a way to do it because nobody had taught me that it’s only had to be done only one way. There were very few people who mixed lead and copper foil, we do that all the time.

Cindy didn’t take stained glass classes; she focused on animal biology and studied animals seriously because animals have always been a part of her life. Her family, the Mushets, have lived in Julian for generations and her parents Buzz and Dorothy have always had a reverence for the land and people who came before. From a young age, she was involved with animal rescue but over time her path drew her to conservation and animal behavior work.

My dad used to do some gold mining, he used to take us as kids with him into the mines. The only animals in the mines were bats, sometimes a skunk, or ringtail cat but almost always bats. I wasn’t that interested in gold mining, but the bats always interested me, so I watched bats a lot. Then I found out people didn’t like bats. And I was really surprised because they were such cool animals.

Cindy found that certain animals like raptors, wolves, and big cats garnered attention in the rescue world but the common animals didn’t. So she decided to help animals that most people didn’t consider important; she’s done a lot of work with bats, coyotes, crows, and ravens. Her goal became to educate people on the importance of these animals and to develop a respect for their place in a healthy ecosystem. She has worked with Bat Conservation International, Project Wildlife – for rehabilitation, and University of Berkeley – for biological survey.

Tell me how raising birds became such a large part of your life?

I started raising birds that were endangered species, and I got more into birds when I had kids, it was something I could do in the daytime, unlike studying bats. I would love to start a non-profit to serve as a retirement home for animals that need help like macaws and horses.

Cindy on horseback at her Banner Creek Ranch near Julian.

At her family ranch, “The Banner Queen”, with over 200 birds, various livestock, her twin sons, and her husband Larry, she raises and sells a lot of Serama chickens, which are small, friendly, and incredibly gorgeous birds. She explains to me that people who want a bird as pets are drawn to Macaws and other parrots but often don’t realize how difficult they are to raise, and how long they live. This topic isa passionate one for Cindy. She is always happy to engage with anyone who is thinking about buying a bird, or any other animal, to help them understand what they are committing to. When she isn’t tending to her birds or building pieces of stained glass, you can find Cindy performing in a Belly Dancing troupe around town, the Tribal Mountain Gypsies.

Why did you start belly dancing?

I’ve always done some kind of dancing, my mom put me in ballet at 5 or 6, I love ballet, I’ve done jazz and other types of dancing too. I tried to go back to ballet after having twins and it didn’t work out too well. I kinda was discouraged by my changed body, then I heard about the women starting bellydancing up here. I thought if I could come to terms with my body enough to belly dance then I’d be doing good.

Your troupe seems pretty tight, what bonds you together?

Belly dancing is one of Cindy’s many passions.

Dancing was part of a healing process. A lot of the women in the group have been through something. It’s all about supporting each other.

If you ever get a chance to see the Tribal Mountain Gypsies, take it! Their performances are fun, sultry, engaging, and each dancer is truly a pleasure to watch. Cindy is known for her moves involving an Arabian-style sword that she balances on her head.

In traditional Slavic lore, the firebird is described as beautiful but dangerous, and that’s Cindy; beautiful, stoic, and untamed. Through her skilled hands, the Findhorn Firebird rises from the ashes back in Julian, at the same place it was brought to life 40 years prior. It’s a truly special time as this is the first piece of stained glass James Hubbell has ever replicated in his career, a challenging project made possible because of Cindy’s dedication and talents.

Interested in Stained Glass? Learn from Cindy at Ilan-Lael, she is now offering workshops Click Here to view schedule

You can view the Firebird before it heads to Findhorn, Scotland at the Helms Bakery District from April 29 through June 18, 2022.  In Harmony with Nature: The Architectural Work of James Hubbell, is James Hubbell’s first solo exhibit in Los Angeles and a must see if you are able. A catalog of the exhibit, including images of the firebird is available for purchase in our online store.


Laurel began working at Ilan-Lael as a mosaic tile artist for Hubbell Studios. But it wasn’t long before her many other talents were put to work by James. You might see Laurel repairing the roof of a building, or waist-high in a hole shoveling dirt, or photographing the art and nature on the property, or helping out in the studio forge or stained glass studio. Her skills are multi-dimensional. But her favorite place is in the art archive where she’s served as the Ilan-Lael Foundation Archivist since 2018. She’s been tasked with organizing, cataloguing, and preserving the vast body of James’ work.  In 2022 Laurel became the Ilan-Lael Operations Manager, helping to run programs and working with the Ilan-Lael team to serve the mission of the foundation.