A story of rebirth

James Hubbell became enamored of The Firebird myth, an important Slavic and Russian folktale, after reading the book Land of the Firebird: The Beauty of Old Russia by Suzanne Massie. He built his first Firebird Window in 1981.

He traveled to Vladivostok in 1989, as part of a delegation of four San Diego artists invited to exhibit artworks during the time of Perestroika, a political movement for reformation within the Communist Party of the Soviet Union during the late 1980s. With this new glasnost (openness) Russian friendships were made which led to the invitation for Hubbell to build the first Pacific Rim Park in Russia in 1994.

In 1998 he was invited to mount an art show in Moscow at the Shusev Central Museum of Architecture. On the way to Russia, Hubbell and his Firebird window laid over in Findhorn, Scotland. Circumstances were such that it got stuck there. Findhorn loved the window and it remained on display in their Resource Center for 27 years. The building and window were destroyed by fire in January of 2021, and Findhorn approached Hubbell about making the same window. Luckily, the studio craftsmen found the original pattern and were able to rebuild the window and frame. The rebuilt window is what is displayed today.

Land of the Firebird: The Beauty of Old Russia

An excerpt from the book by Suzanne Massie 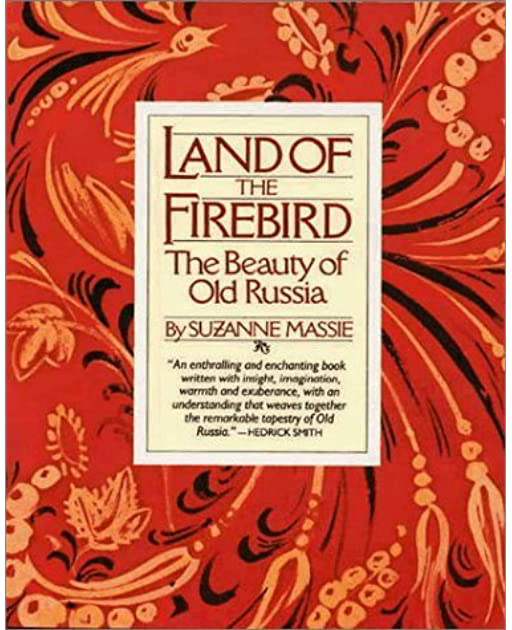 Once upon a time very long ago there was an orphan girl named Maryushka. She was a quiet, modest, and gentle maiden. None could embroider as beautifully as she. She worked with colored silks and glass beads, making for one, a shirt, for another a towel, or a pretty sash.  And she was always content with the money she received, however small.

The fame of her skill reached the ears of merchants beyond the seas.  From near and far they came to see her marvelous work. They gazed and were amazed, for they never thought to find anything so beautiful.  One after another, they tried to persuade Maryushka to come away with them, promising her riches and glory.  But she would only lower her eyes and reply modestly: “Riches I do not need and I shall never leave the village where I was born.  But of course, I will sell my work to all who find it beautiful.” And with that, although they were disappointed, the merchants had to be content. They left, spreading the story of her skill to the ends of the earth, until on day it reached the ear of the wicked sorcerer Kaschei the Immortal, who raged to learn that there was such beauty in the world which he had never seen.

So, he took the form of a handsome youth and flew over the deep oceans, the tall mountains, and the impassable forests until he came to Maryushka’s cottage.

He knocked at the door and bowed low to her, as was the custom. Then he asked to see the needlework she had completed. Maryushka set out shirts, towels, handkerchiefs, and veils, each more beautiful then the other. “Kind sir,” said she, “whatever pleases you, you may take.  If you have no money now, you may pay me later, when you have money to spare. And if my work should not find favor in your eyes, please counsel me, and tell me what to do, and I shall try my best.”

Her kind words and the sight of all that beauty made Kaschei even angrier. How could it be that a simple country girl could fashion things finer than he, the great Kaschei the Immortal, himself possessed. And he took his most cunning tones and he said:

Come with me, Maryushka, and I will make you Queen. You will live in a palace built of precious jewels.  You will eat off gold and sleep on eiderdown. You will walk in an orchard where birds of paradise sing sweet songs, and golden apples grow.

“Do not speak so,” answered Maryushka. “I need neither your riches nor your strange marvels.  There is nothing sweeter that the fields and woods where one was born.  Never shall I leave this village where my parents lie buried and where live those to whom my needlework brings joy. I shall never embroider for you alone.”

Kaschei was furious at this answer.  His face grew dark, and he cried, “Because you are so loath to leave your kindred, a bird you shall be, and no more a maiden fair.”

And in an instant a Firebird flapped its wings where Maryushka had stood.  Kaschei became a great black Falcon and soared into the skies to swoop down on the Firebird.  Grasping her tight in his cruel talons, he carried her high above the clouds.

As soon as Maryushka felt the power in those steel claws and realized she was being taken away, she resolved to leave a last memory of herself.

She shed her brilliant plumage and feather after feather floated down on meadow and forest. The mischievous wind covered the feathers with grass and leaves, but nothing would rob them of their glowing rainbow colors.

As the feathers fell, Maryushka’s strength ebbed, and although the Firebird died in the black Falcon’s talons, her feathers continued to live, down on the ground. They were not ordinary feathers, but magic ones that only those who loved beauty and who sought to make beauty for others could see and admire.

Above photo of finished Firebird by Laurel Costa 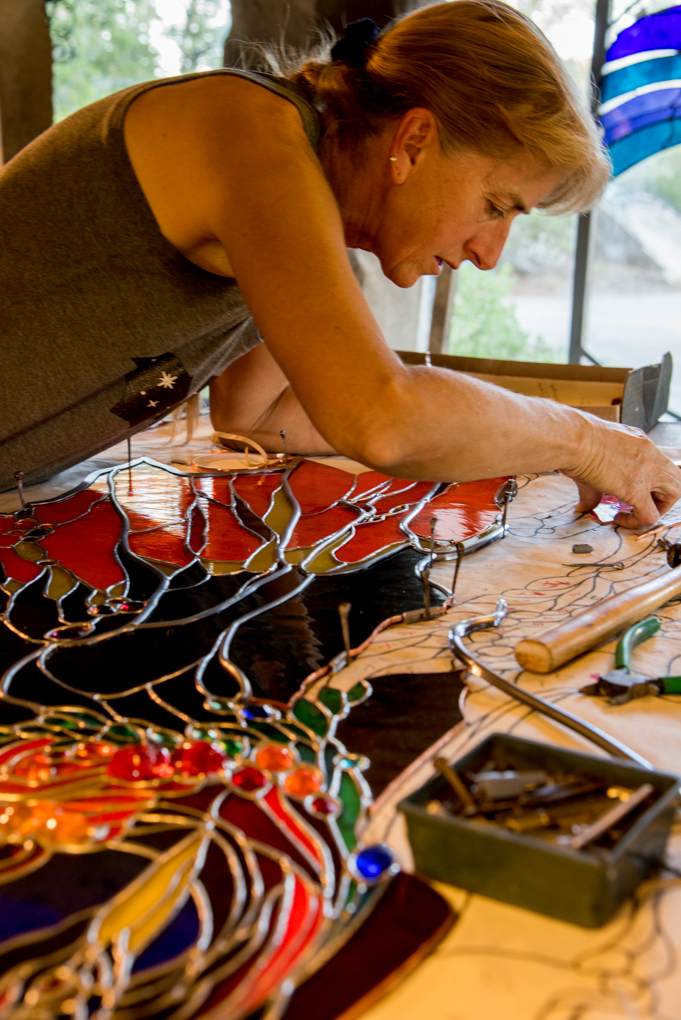 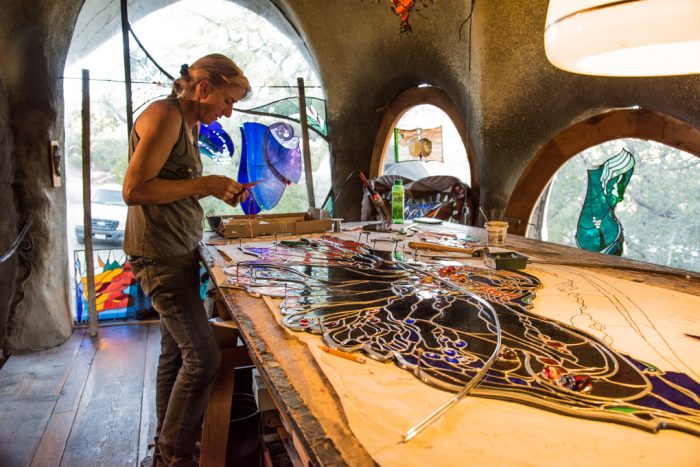 The glass window is laid over the original pattern to check for accuracy in size and color. PHOTO: Laurel Costa 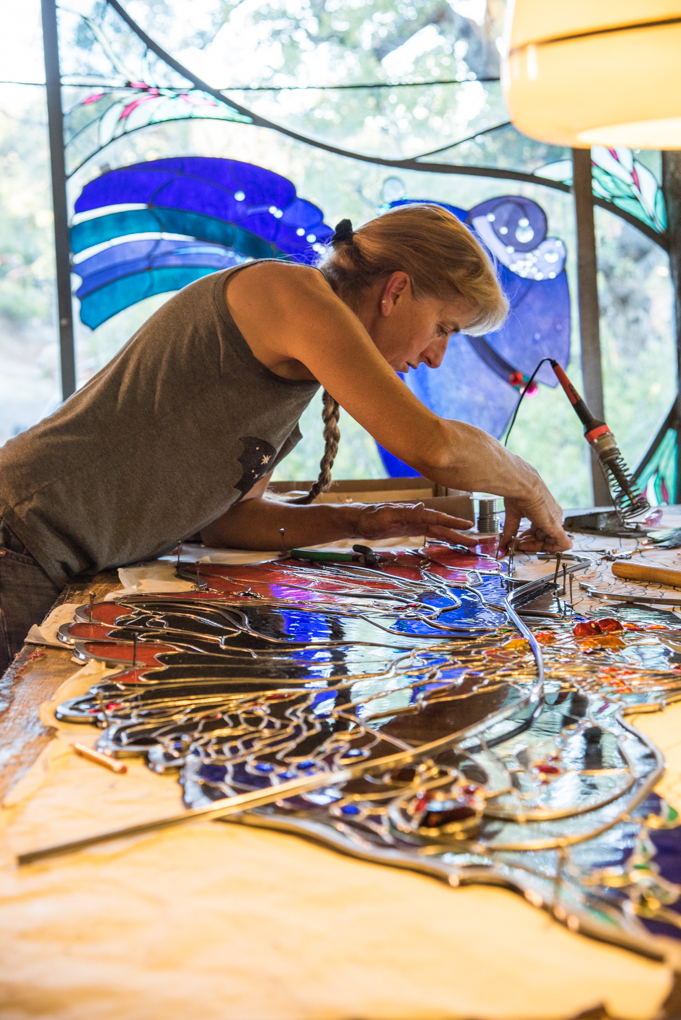 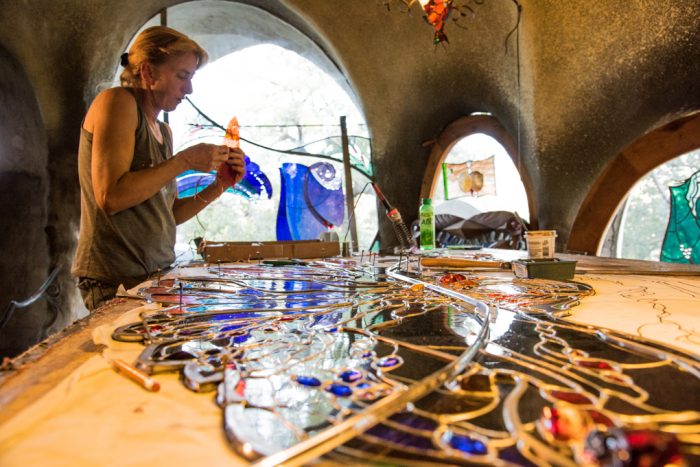 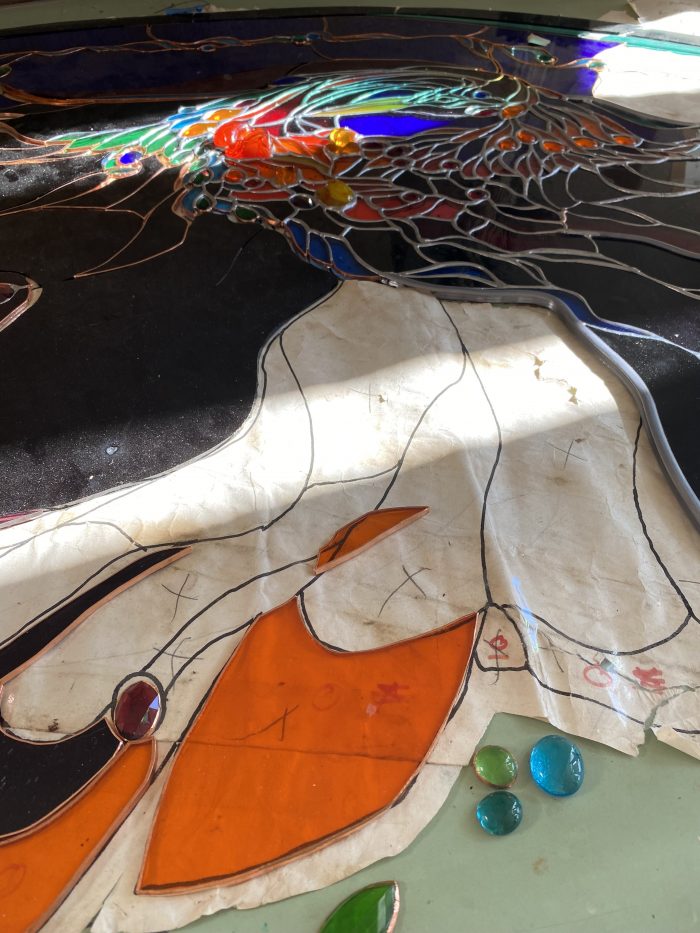 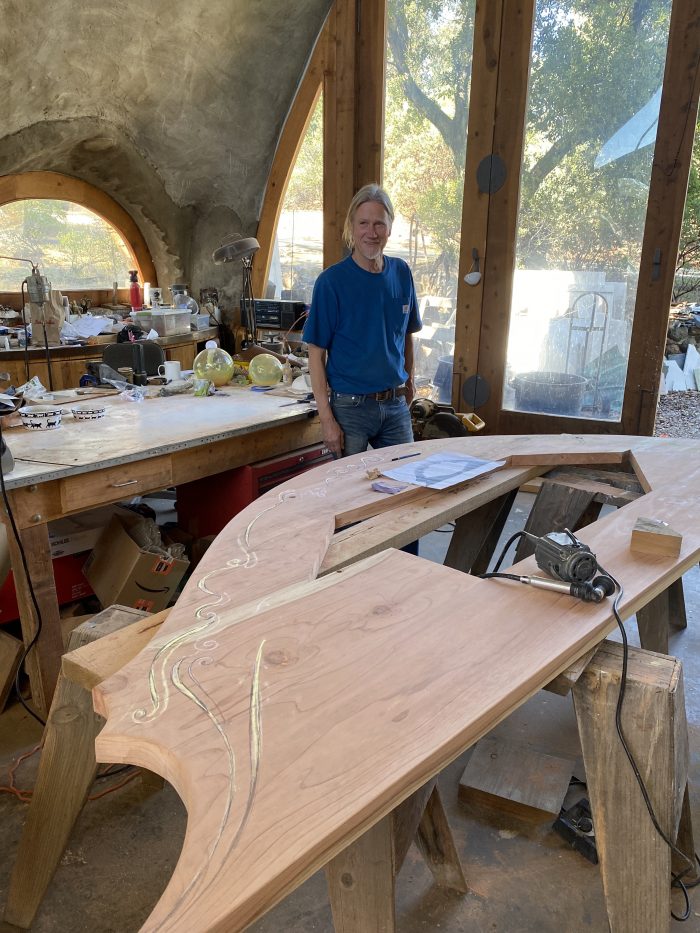 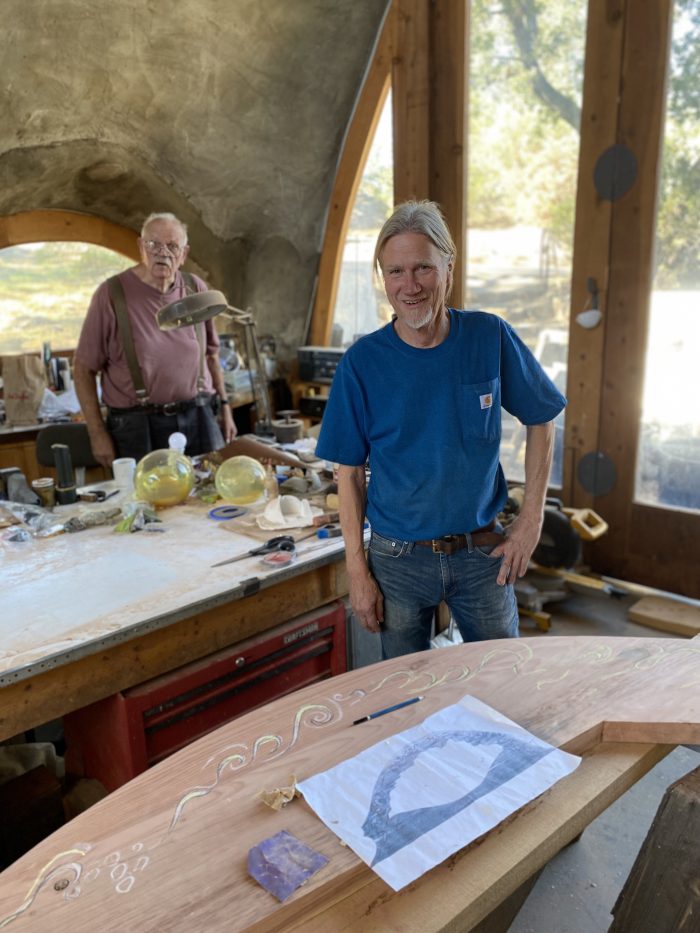 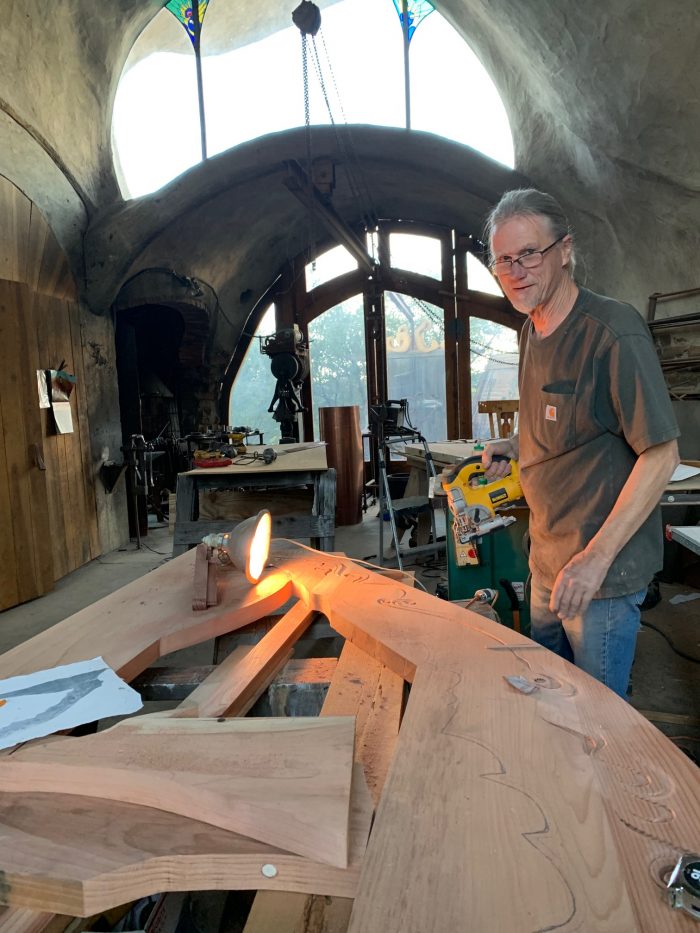 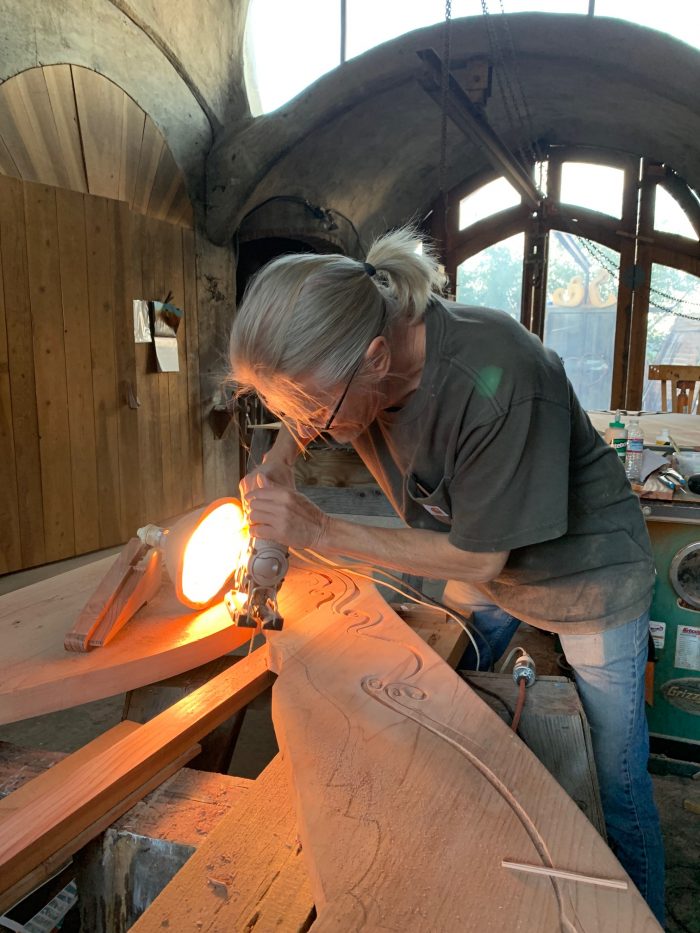 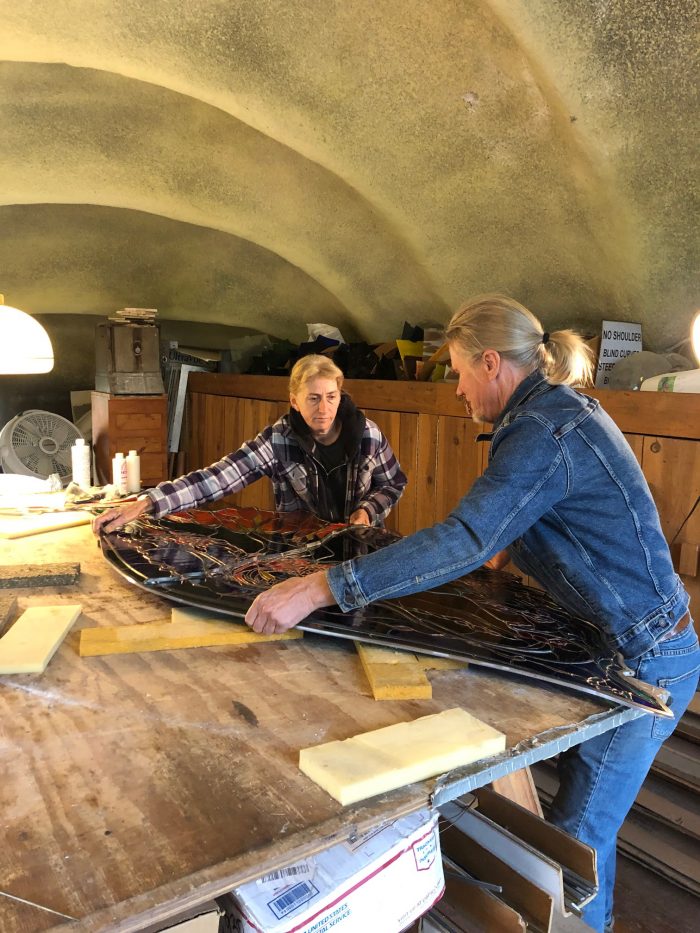 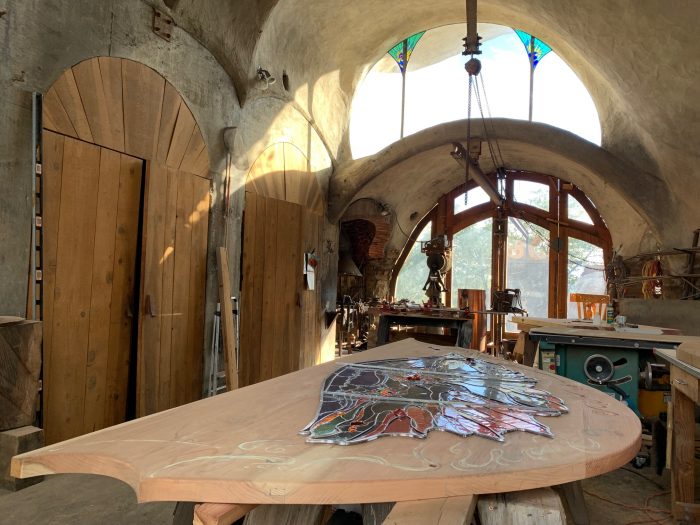 The Firebird's wood frame under construction in the Big Studio. PHOTO: Laurel Costa 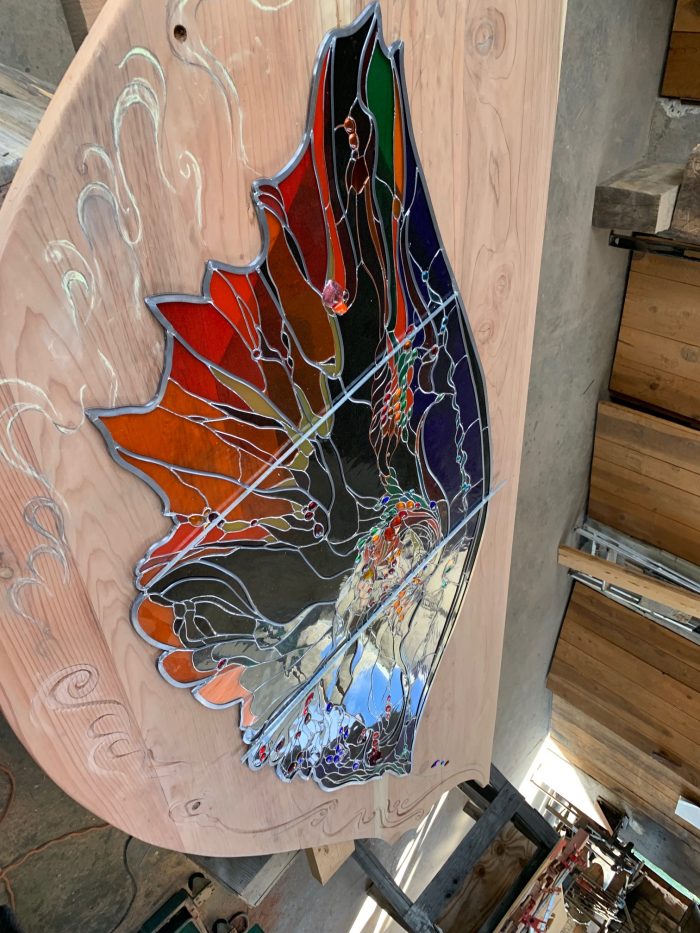 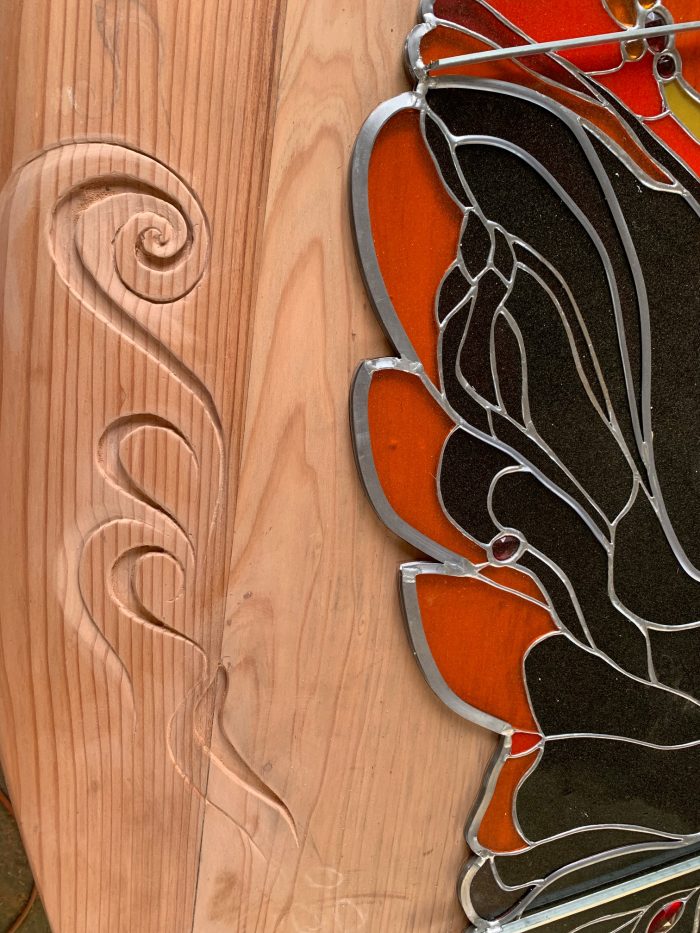 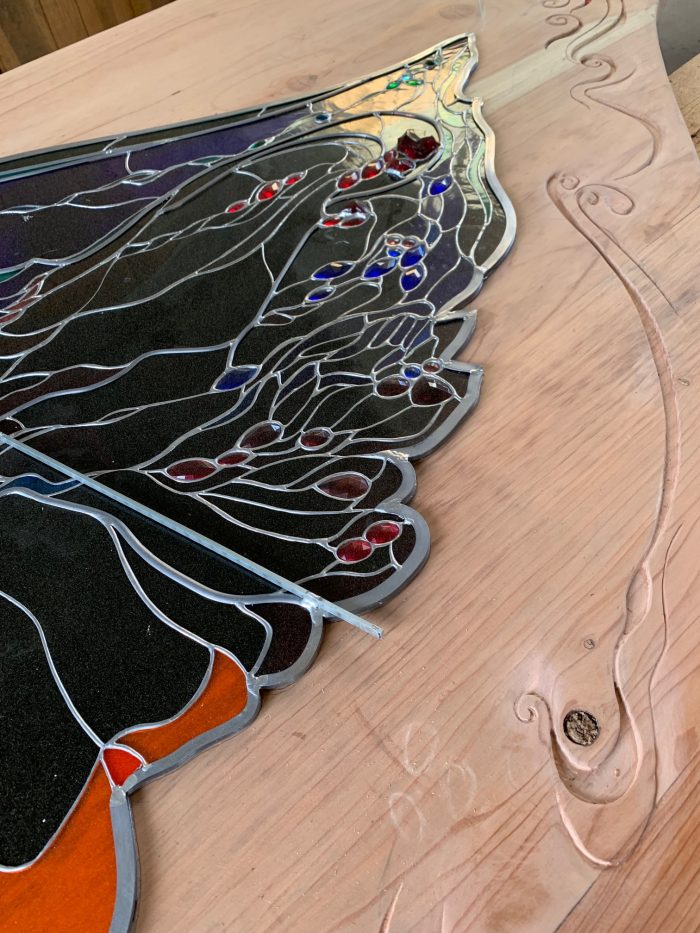 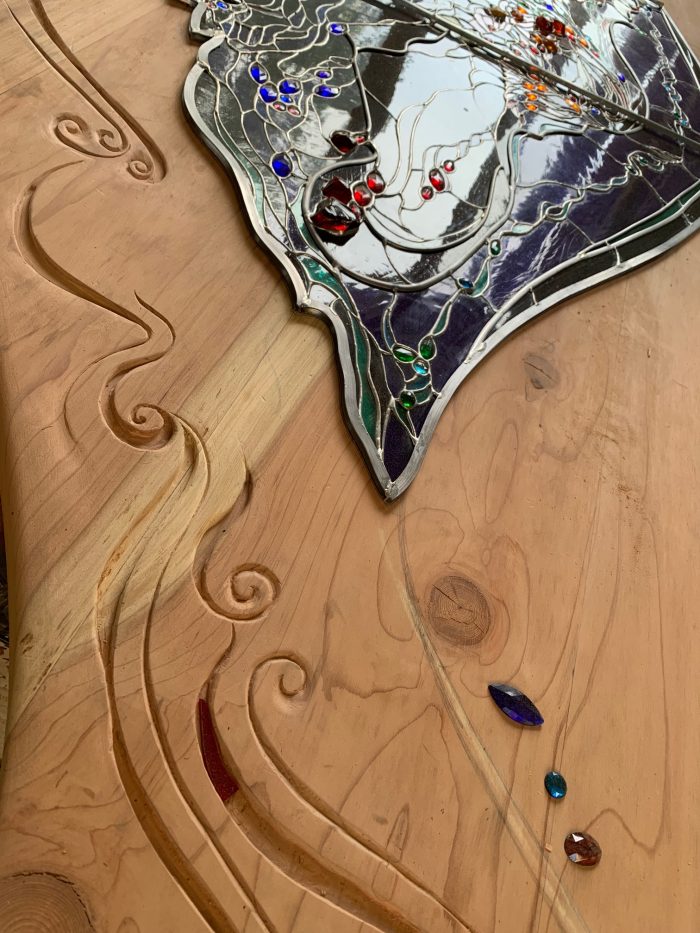 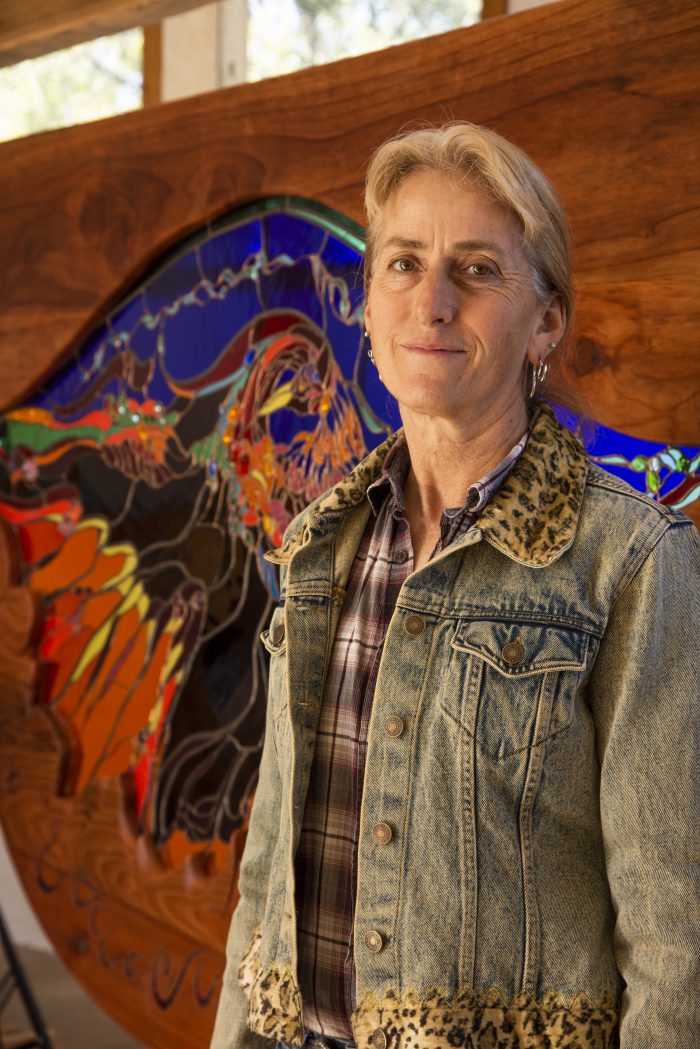 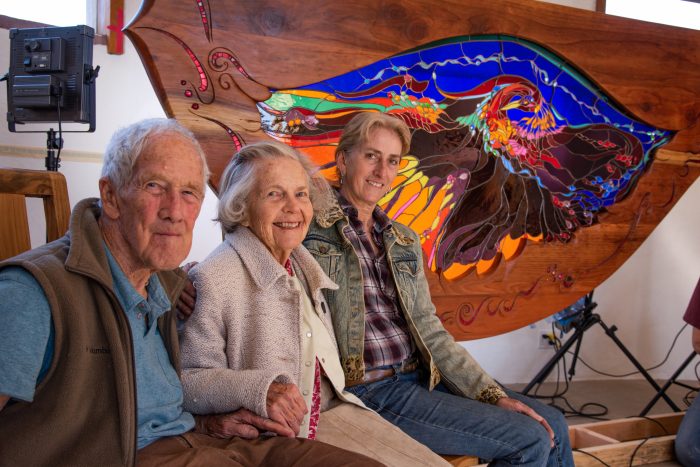 One response to “The Firebird Window”