Environmentalist Diane Coombs, a friend of Ilan-Lael, looks back on battles lost and won.

Walking the grounds of Ilan-Lael with Diane Coombs is a special treat. Sure-footed fora 91-year-old, her eyes shine as she takes everything in — as if for the first time, but she’s been here many times before. Her enthusiasm buoys all who follow her along the paths in search of several art “installations” being created by a group of high school students: a program called Watershed Explorers that she supports.

Diane is a good friend of the Hubbells. A staunch environmental and community activist, she has played a pivotal role in numerous land-use and preservation projects throughout San Diego County for many decades.

We spoke with Diane about the long struggle to save San Diego open space for all to enjoy—or at least lessen the footprint of development. She was soon to be on her way to Volcan Mountain to celebrate her 91st birthday with family and friends. 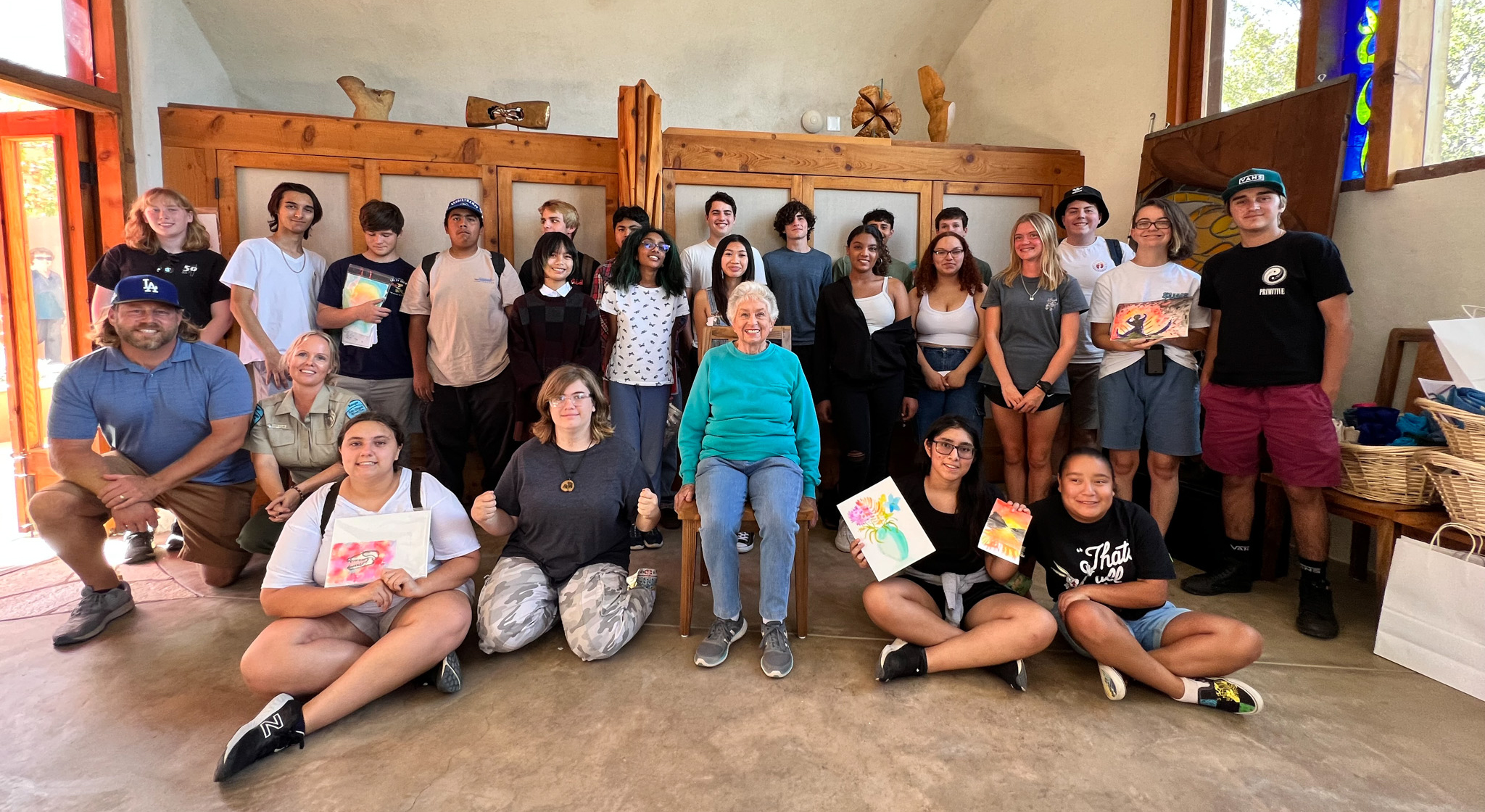 Diane Coombs and students from High Tech High in San Marcos participating in the Watershed Explorers program at Ilan-Lael. Photo by Laurel Costa

Where did you develop your love of nature?

My earliest memories of the outdoors and natural world are from growing up on a farm in Utah where I wanted to be outside every minute! I would have, too, but my mother would hear our squeaky screen door and tell me to get back inside if I still had chores to finish.

What brought you to San Diego, and how did you keep your connection with nature?

My husband took a job at Convair and we moved into a little duplex in Clairemont that was right near a canyon. Next came our family house in Serra Mesa, also near a canyon but overlooking still-beautiful Mission Valley. We went down to the valley to buy our vegetables. It was one of the first watersheds in the county to be destroyed. Later they put 805 through. My son and his buddies were mad that they were destroying a canyon they played in.

Soon you were an environmental activist. How did that happen?

When I watched the high rises go up in La Jolla, I was inspired that a community like La Jolla could rise and say “enough.” My involvement in community affairs really started in the early 1960s when a friend introduced me to the local scene. I was a young mother with one child at the time, two eventually, and I wanted to have an intelligent conversation or two beyond being home with toddlers. I joined Citizens Coordinate and League of Women Voters: both groups promoted good government, planning, and citizen participation. They lost the battle to save Mission Valley but won the battle to save the Tijuana estuary.

I then worked 15 years in the Board of Supervisors offices pushing preservation goals for five different supervisors. Next, I was asked to head up the Joint Powers Authority (JPA), where we worked for a decade to protect the remaining San Dieguito River Valley watershed. That was the last paid position I held. I continue to serve on the Citizens Advisory Committee for San Dieguito River Park. We work to connect all member agencies, and it is an amazing way to continue to communicate and cooperate.

How did you first meet the Hubbells?

l met them when volunteering for C3 (Citizens Coordinate for Century 3) in the 1960s. We were given space in Lloyd Ruocco’s office and I enjoyed every minute of it. Jim and Anne were great friends of Lloyd’s. Our board included the Marstons, the Revelles, the Munks…concerned citizens all. Later we had meetings in the House of Hospitality in Balboa Park and Jim donated several paintings to be sold to raise funds. One hangs in my home now.

At that time there were several threats to the Julian area. A property on Volcan Mountain was proposed for development and C3 helped defeat that project. I was at the Board of Supervisors at the time. Funds from a state bond eventually helped purchase the property.

What do you find most attractive about the Hubbells’ lives, their art, their dreams?

They are so generous and welcoming in sharing their magical place. They have a unique ability to bring young people together from all over the world, inspiring everyone to physically work together and get to know each other while designing and building peace parks in countries around the Pacific Rim.

Now they are sharing their amazing home with kids through the Watershed Explorer program. They realize we’re all part of the whole, and this is how we reduce hate and build love.

Looking back on your life and career, what do you feel is your signature accomplishment?

I think watershed protection was key. I saw what happened to Mission Valley and what was going to happen to the San Dieguito watershed, and I decided “enough!” Of course, there were threats to ALL the watersheds. Watershed protection must cover our entire area from mountains to ocean.

You are a driving force of a new watershed program—in part—with Ilan-Lael. How did it come about?

The San Dieguito River Valley Conservancy, in partnership with Volcan Mountain Foundation, San Diego Archaeological Center, and San Dieguito River Park, wanted to help each organization expand individual nature education programs. Watershed Explorers was launched, but transportation was a problem. I went to Diane Jacobs and she said she would fund one of two vans. That was easy.

We try to focus on Title One schools, girl scouts, and other organizations in geographical locations where children don’t have the opportunity to get out in nature very much. This has been a wonderful day. It is truly inspiring to see how much fun they are having. And then to see the artwork they created!

Has the environmental and preservation movement in San Diego reached its full potential? Is creating a huge new park, like River Park or Mission Trails, still possible?

Not in the present environment. Environmental groups used to get together and spend most of a day talking about where we are, where we want to be, and how we can work together to get there. It looks like it won’t happen this year. I’ve been a little concerned about some environmental groups that don’t seem to have done their homework.

We need to go back to a city manager form of government and get rid of the “strong mayor” approach, so we don’t have toadies appointed by the mayor. We need a professional manager who will appoint professionals to do the job right, without being influenced by special interests with campaign contributions.

What are the greatest threats to what’s left of the natural world in San Diego?

I would say climate change and campaign contributions. And misplaced priorities. Talk of a “housing crisis” is an example. They’re putting housing in the wrong places, and the housing they do build is not meeting the market deficit, which is low-income.

Is there any hope for San Diego Bay having a waterfront devoted more to open space than big projects like massive new hotels and football stadiums?

One battle right now is the proposal to redevelop Seaport Village, which will destroy Ruocco Park. I’m afraid we’re going to go to court on this. In opposition, we have people involved who knew Lloyd Ruocco, and they’re angry, and I’m angry.

Is using mitigation funds from a project that has destroyed habitat a good way to save habitat that is somehow more “worth” saving?

Mitigation funds create opportunities. One example: we got involved with saving Rutherford Ranch. Phillip Rutherford was a tough guy and wasn’t going to sell. But a fellow at Trust for Public Lands made friends with Phillip and explained to him how if he sold at what WE could pay (via mitigation funds), he would get a tax benefit for the difference between his appraisal and ours.
And by golly it worked.

A major source of funds was Southern California Edison. I was working with the Coastal Commission and they had to create wetlands. San Dieguito’s lagoon restoration came to fruition. Currently Cal Trans’s mitigation for widening I-5 will restore even more wetlands in the San Dieguito lagoon. With sea-level rise, we’ll lose some of our wetlands, so we need to restore their more eastern areas.

How well is San Diego positioned in terms of offsetting issues that come with growth, such as congestion, pollution, and depletion (i.e. water)?

We’re doing it by helping kids go home from programs like Watershed Explorers and saying to their parents, “You won’t believe what I did today that I can’t do in our neighborhood.” San Diego City Counsel has done a terrible job of sending money to communities that don’t need it. The city has vacant land. Pocket parks—built by community members so they feel a sense of ownership—should be created.

Where do you get your “nature fix?”

I’m living on top of Del Cerro and I find that going to Lake Murray is easy. I used to do a five-mile walk there, but now I’m down to two and a half. I see squirrels and occasional Canadian geese. I enjoy going to Volcan. And the beach, where we go to Kono’s for breakfast and then walk. I like the entire River Park. We go to restaurants like Jake’s or Viewpoint and take off on a walk from there. And finally, the wetlands trails are wonderful.

How would you counsel a younger version of yourself to take on the next big effort to save a San Diego wild place that is now in private hands?

Participate and help organize events. Get a message out via social media that tells other kids how cool it is to be involved with saving parklands and open space. 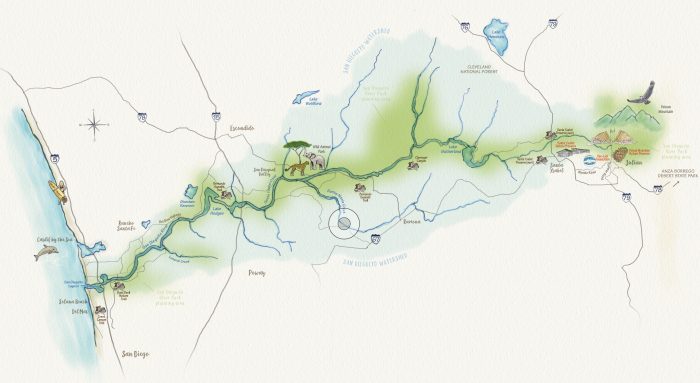 Read more about the San Dieguito River Park: FROM SOURCE TO SEA THE MANY WAYS SAN DIEGUITO RIVER PARK INSPIRES ILAN-LAEL … AND THE ARTIST IN ALL OF US 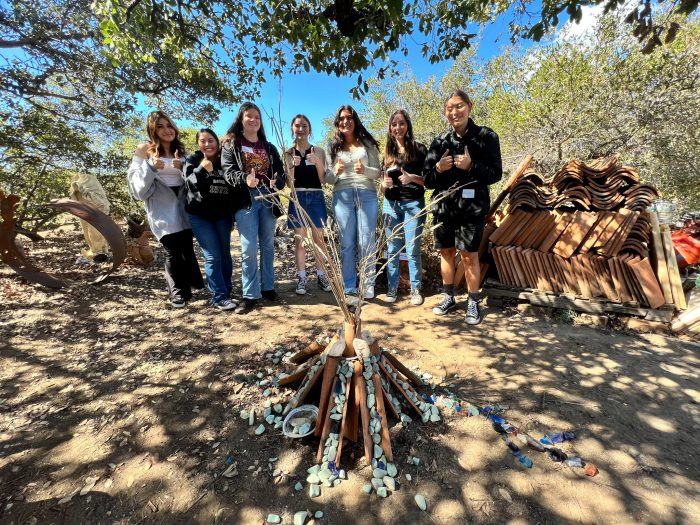 TOP PHOTO: Diane Coombs sits under the Edelman Oak at Ilan-Lael during her recent visit to Hubbell Hill. Photo by Laurel Costa