A Conversation with Richard Louv and Ilan-Lael Board Member, Peter Jensen

Not long after “Our Wild Calling” was published in November of 2019, the world experienced the Covid-19 pandemic. As people sequestered at home, many of us were fascinated by the return of wild animals to our neighborhoods. Did the rewilding of cities surprise you?

Many of these animals were already in there, hiding in plain sight. Wild creatures that usually go about their waking lives during the day tend to become nocturnal near humans. During the lockdowns, some of them reverted to their natural rhythms. When air and water cleared, we not only saw what we missed, but also what we hope to see — a glimpse of a natural world restored.

Those foxes and coyotes cruising the street made some people hopeful, others afraid. So does the fact that some viruses jump from wild animals to people. What about potential backlash against animals?

That’s possible, but the animal most responsible for the pandemic was human. Jane Goodall and others point to human cruelty to domesticated and wild animals and the destruction of wildlife habitat and depletion of biodiversity as the source of this and probably future pandemics. Humans may revert to their historic tendency to blame nature itself. I hope the good signs of a growing hunger for nature won’t be offset by a backlash toward other animals, particularly in cities, increasingly populated by wild animals. The pandemic underscored that the health of humans cannot be protected or improved without also attending to the health of nature.

You write about the One Health movement and it seems increasingly urgent, especially if—or maybe when—there are future pandemics.

As you know, this is a movement in public health that focuses on the interrelationship of humans, the life around us, and the overall health of the planet. Yes, wild animals can transmit what are called zoonotic diseases, but animals can also serve as early warning signs of disease. One of the experts I quote in the book is Howard Frumkin, former head of the CDC’s Center for Environmental Health and, until recently, the dean of the University of Washington’s School of Public Health. When I spoke to him again recently, he suggested rigorous monitoring of animal populations for the disease-carrying viruses and bacteria that jump from wildlife to people. Also, it will be increasingly important to create wildlife corridors, reserve vast tracts of wilderness primarily for wildlife, protect biodiversity and support other ways that human beings and other animals can coexist. We must balance the risks and benefits of coexistence. The way to do that is not extermination, but management.

And it’s important to remember that this isn’t just about us. Animals have a right to exist, even if we didn’t benefit from them. In environmental ethics, this is called “existence value.” Still, I do think that, as a society, we should talk more about those benefits, including ways to make sure the good is reciprocal, for us and for other animals. One of the themes of “Our Wild Calling” is the increasing prevalence of human loneliness. Even before the pandemic, social isolation rivaled smoking and obesity as a risk to health. The rise of human loneliness is caused by many factors, but it may also be rooted in species loneliness.

Can we address that loneliness in a world where social distancing may be necessary for the foreseeable future?

For a long time, my wife and I (well, mainly me) have wanted another dog. Within days of the lockdowns, she put us on an animal shelter foster care waiting list. Turned out, we weren’t alone. People all over the country rushed to foster and adopt pets. Domestic or wild, other-than-human animals help us feel less alone in the universe.

Can you share some other tips about how to deal with species loneliness?

Even in the most densely populated neighborhoods, we can notice songbirds and raptors and other animals in ways we never knew or took for granted. We can create “sit spots” in our yards, or even next to a window, where we can use all of our senses to quietly immerse ourselves in the life around us. We can send for mail-order seeds to plant a pollinator garden for butterflies. Or, as entomologist Doug Tallamy suggests in “Nature’s Last Hope,” we can help create a homegrown national park by replacing part or all of our lawns with native species. And then we can watch the native insects and wildlife that we may have never seen before, come home. Still, all of this depends on where you live. The pandemic made clearer than ever the inequitable distribution of parks and yards and other places to connect to nature, and we’ve got to fix that. We also need to support the economically hard-hit programs and schools that directly connect people to nature, especially children who otherwise wouldn’t have that connection.

Since the book was published, have people continued to tell you stories about how animals have changed their lives?

You bet, and I never get tired of hearing them. Artist Susan McDonnell sent me her story, accompanied by an extraordinary painting. “In the early 2000s, I lived in a house with a small garden pond,” she wrote. She described how, in the late Spring, a Red Darner dragonfly took up residency. She started taking photos of it. “Over time the dragonfly let me get within inches and then let me lightly touch its wings. This dragonfly showed up every morning around 10 and patrolled the pond until around 4 pm for about 4 months. We ‘visited’ every day and I spent a lot of time quietly observing and marveling at the dragonfly’s beauty. This dragonfly was a bit of a ham.” McDonnell was already an accomplished artist, but her moments with the dragonfly were transformative. “It was at this time my paintings became more focused and detail-oriented in subject and technique. All that slowing down, observing, and being completely delighted every time I went to the pond and saw the dragonfly had returned had a huge influence on my paintings from then on.” Surely the art of seeing is about resilience and transcendence.

Looking forward, do you think we have a chance for what you call a “great reset” in our relationship with nature?

You may recall the images from the cataclysmic Australian fires in 2019. They were both painful and uplifting. As the fires were just beginning to recede, young people were biking through scorched and burning forests to bring water and food to suffering animals; koalas climbing onto human laps to reach the bottles; the “carers,” as the NGO Animals Australia called the compassionate people who had lost everything but headed out with “only the clothes on their backs to help injured and burned animals.”

What will it take to move our species to act on climate disruption, biodiversity collapse, the threat of mass extinctions, and pandemics related to our treatment of animals?

A reliance on facts, data and logic is clearly not enough. We need at least two additional ways to make the case. The first is love – deep emotional attachment to the nature around us. The second element is imaginative hope – our ability to describe a future worth creating. The Australian eco-philosopher Glenn Albrecht argues that only “a shift in the baseline of emotions and values has worked” to transform facts into action in other areas, such as feminism, same sex marriage, and racial inequities. The reason why these causes have made some progress in his and other countries is because “they revolved around the issue of love.” Those images from Australia reminded us that we belong to a larger family, one worth loving.

What gives you hope?

The continued growth of the children and nature movement. The realistic idealism of my sons. And sometimes the shared resilience of humans and other animals. My friend, Suz Lipman, who lives in the Bay Area, referred to the Italians who, when sequestered, sang to each other from their balconies, and then she wrote on Facebook: “In Mill Valley, we have the Mill Valley Howl. Each night at 8 p.m. residents open their windows or step outside to howl into the night. “The Howl suits this place, at the edge of the wilderness,” she wrote. “From my house, the Howl seems to start low in the valley and swell and run through the neighborhoods and canyons and up into the hills.” A howl is a call of social animals. “Howling lets others know, distinctly, ‘I am here. And I see (and hear) you … we’re here in our houses, we’re here on the planet, we’re with one another, alone and together.’”

It is. So, after the next pandemic or fire or whatever life brings us, don’t mourn, plant. Don’t withdraw from the world, persist. And sing the wild calling. 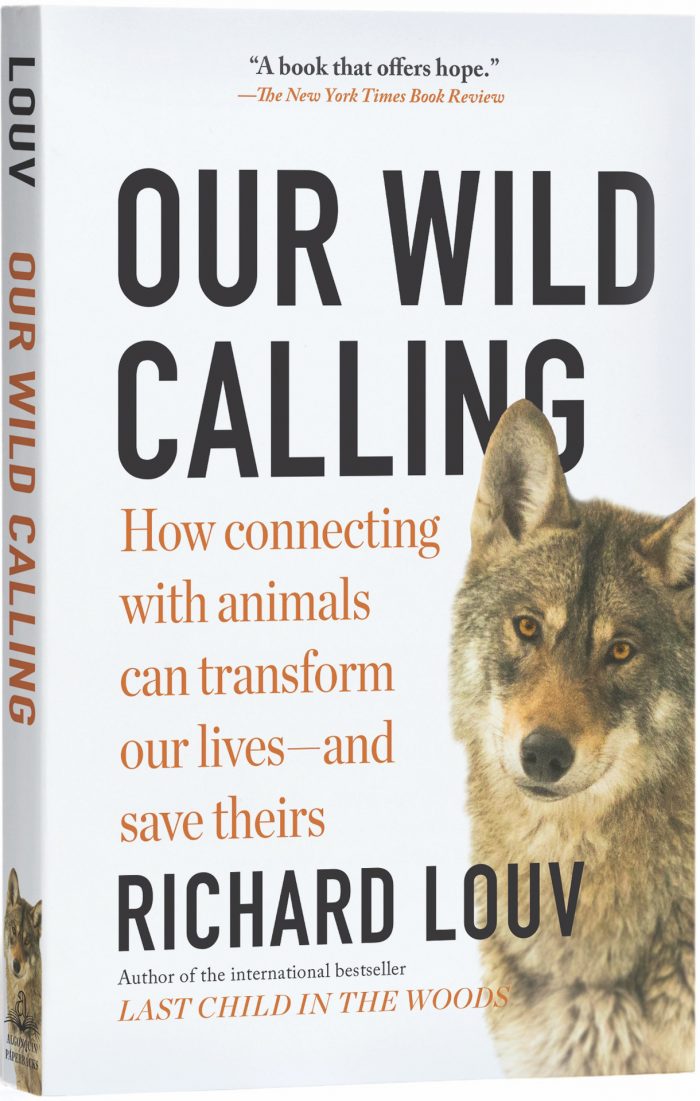 Journalist and author Richard Louv lives in Julian, California, near Ilan-Lael. He is the author of ten books that have helped launch an international movement to connect children, families and communities to nature. He and his wife Kathy are long-time friends of Jim and Anne Hubbell, and Richard spent some time staying in the Boys’ House at Ilan-Lael while working on one of his early books. Richard co-founded Children & Nature Network soon after the breakout popularity of “Last Child in the Woods: Saving Our Children From Nature-Deficit Disorder.” Among many honors over the past two decades, he was awarded the national Audubon Medal (2008); prior recipients included Rachel Carson, E.O. Wilson, and President Jimmy Carter. In May, 2021, Richard dropped by Ilan-Lael for a visit with Jim and Anne and the “Hubbell Hill” team. His latest book “Our Wild Calling, how connecting with animals can transform our lives — and save theirs” (Algonquin Books of Chapel Hill, Chapel Hill, North Carolina, 2019) was fresh on our minds, prompting us to share this conversation. Just as art and nature go hand-in-glove, so do animals and art … and nature. Jim’s art has always drawn on these essential connections.

Richard Louv visits with Jim and Anne Hubbell under their Englemann Oak tree at Ilan-Lael. PHOTO by Laurel Costa