Growing Up A Hubbell

And Now Taking The Reins 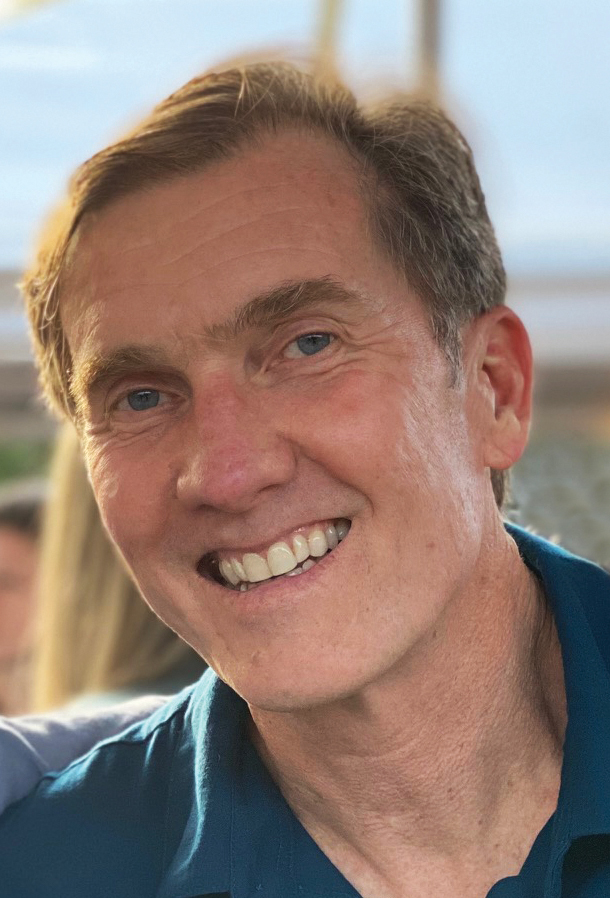 James and Anne Hubbell have four sons, Torrey, Drew, Lauren, and Brennan. Recently, Drew Hubbell, second-oldest, was asked by the board of non-profit Ilan-Lael Foundation to be its second president, following in his father James’s footsteps. (Torrey and Brennan are also active Ilan-Lael board members, and Lauren is director emeritus.) Drew brings a complementary career path to the board. He leads the firm Hubbell & Hubbell Architects, and collaborated for many years with his father, merging art and architecture in ecologically and aesthetically mindful ways. His firm specializes in sustainable architecture, green building materials and the use of alternative building materials such as straw bales, insulated concrete forms, adobe, and sprayed concrete construction. Locally, Drew helped pioneer the use of alternative building materials, and has been a key figure in educating public agencies about their benefits, in order to gain acceptance and permits for these materials. Drew designed the first permitted straw bale structure in San Diego County, and his firm designed the first permitted straw-bale commercial building in the City of San Diego. Drew and his wife Pam have two sons, Connor and Dylan, and a daughter, Aeliana.

Everyone who visits your parents’ home wants to know: what was it really like to live there, to grow up there?

So many wonderful memories. One would be walking home from Spencer Valley School, the one-room school house at the end of Orchard Lane, with my brothers. Our parents would drop us off in the morning, but after school they allowed us to walk the mile home. Sometimes it would take us until dusk because there was a lot of exploring to do: throwing rocks in the pond…shooting bow-and-arrows with a neighbor friend…climbing trees in the apple orchard. In the fall, we could eat our fill of apples on that walk home. It was pretty fun.

I knew our house was unique, but we grew up around organic architects like Ken Kellogg, and so many talented artists and craftspeople working with dad — a world of uniqueness. It wasn’t until high school, when I went off to a boarding school in Claremont, California, and lived in a concrete box dorm, that I realized what a special and unique place our home was. 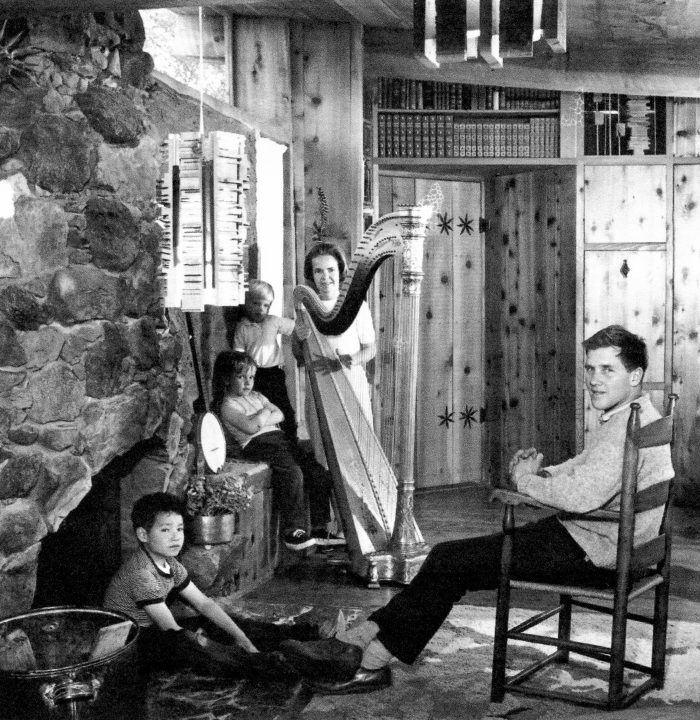 The Hubbell family in their livingroom, 1967. PHOTO: John Waggarman.

Which led to architecture?

By the time I was in college, architecture as a career was in the back of my mind. I came home from college to visit during the time dad was fashioning the Doors of Abu Dhabi. They had doors and stained glass everywhere. The studio was a big space, but every corner had someone carving or sanding … he brought together so many wonderful artisans. The doors are some of the most beautiful works he’s ever done. To come home to that scene from a world of dormitories and classrooms was amazing.

Artisans from all over the world have been drawn to dad. Some stayed for weeks, months, even years. San Diego architect Robert Thiele lived in a camper here for a couple of years as a young man just starting out. He was like an older brother.

One summer I interned with architect Wayne Donaldson, whose office was in San Diego’s Gaslamp Quarter above San Diego Hardware. I really enjoyed that summer, and after that I went to architecture school at University of Arizona. I worked with Wayne as a project architect for six years. His focus was on historic restoration and he had a construction firm. I have a passion for sustainability and green building, coming from my parents and upbringing at Ilan-Lael, where everything is about the environment, so I went off on my own and formed Hubbell and Hubbell with my father.

Ilan-Lael Foundation began in 1983. What were the early days like? 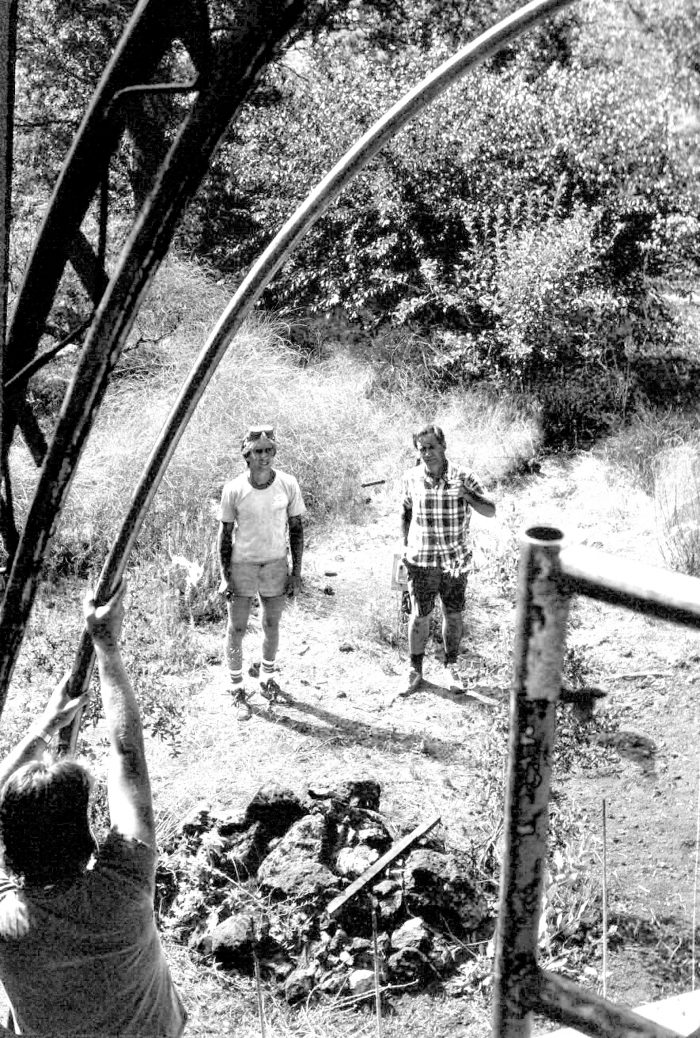 Drew and James Hubbell working on the Ilan-Lael Sculpture studio in 1982.

Wayne’s office was the meeting place for Ilan-Lael’s board in the early days — the ’80s. Wayne was on the board. I wasn’t involved very much at the time, but was aware of what they were doing. Kay Kaiser was bringing out Hidden Leaves at the time with dad, and the foundation was doing lectures, working with arts organizations and neighborhoods … a lot of smaller intellectual things around the city trying to affect how the city would grow and integrate the arts into its future. It was a powerful time.

Dad was getting involved in Baja California. Up until that point, everything he did was personal — meaning his art was personal and a great deal of work was for individual clients. Christine Brady was starting a schools in Tijuana to serve a “colonia” neighborhood, and she interviewed dad to design the buildings. He has always had a passion for helping people that are not as privileged…and he saw the need in Tijuana. He’d been raised in a fairly wealthy family, and had five different fathers, so it brought out something in him.

He went down every week, sometimes twice a week, for years to design and build the schools, often leading crews of volunteers. Today, with the difficulties crossing the border, this seems impossible, but he did it back then. We hosted week-long classes in permaculture, some with Bill Rowley of Laguna Beach, and green building methods. It was much like “Soil and Soul,” the workshop collaboration with Milenko Matanovic and Sarah Livia Brightwood that built Kuchumaa Passage at Rancho La Puerta. Looking back, I see that it led to Pacific Rim Park [which has created seven park/workshop projects around the Pacific Rim to date]. Kyle Bergman, who is on Ilan-Lael’s board of directors, worked on every park with dad, and some in Tijuana, also.

Oh, we had fun. At Colonia Esperanza there was a dirt basketball court big enough for three-on-three, and after we started playing regularly all the best players in Tijuana would show up to challenge us and each other. We had amazing games that lasted into the evenings.

Moving on to today, are you concerned that Ilan-Lael is so identified with your parents? As they move into a new phase of life, no longer living “on the hill,” will Ilan-Lael lose its “North Star?” 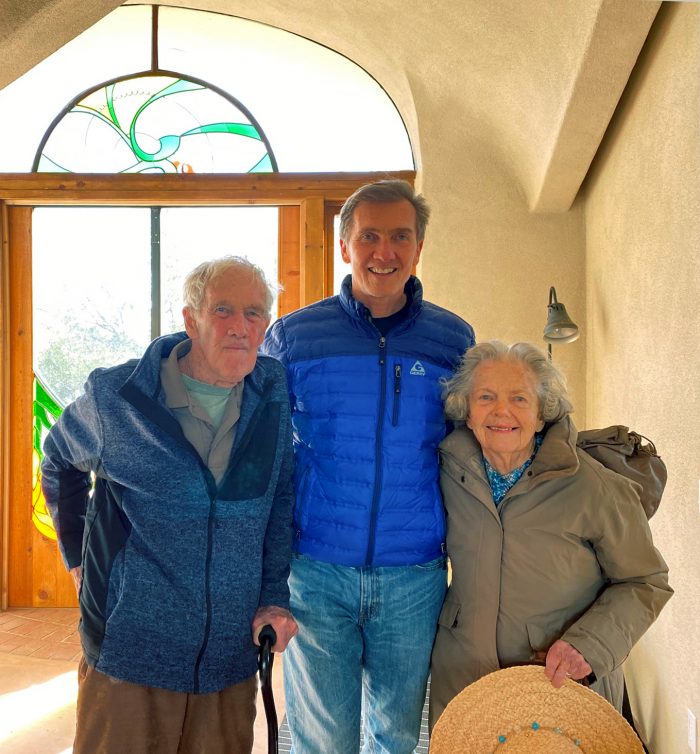 Drew Hubbell with his parents and Ilan-Lael founders, James and Anne Hubbell

Yes, of course … some. They have been such a strong influence for so long, and they are an integral part of everything at the property. But dad has made such an effort to support the board and its efforts to protect the property and ensure its future. Now they’re no longer there, and the process of continuing with Ilan-Lael beyond their lives, and making it flourish, really is at hand.

One of the big assets we have is the new Art Center, where we can host people and go beyond simply leading tours of the property. Visitors can truly experience the place for a day or more, take classes, attend a conference. The conference idea has great potential. Dad has always said he’d like to see something here akin to Camp David, where different people with different (and differing) views can come together and discuss things — and maybe come up with solutions that help the world. Our longtime friend Cathy Conheim, a therapist who practices in La Jolla, has a studio  designed by dad that transforms her clients. She says her clients are often people who are arguing, and when they step inside her studio they forget why they’re arguing! That’s what art, nature, and architecture can do.

Our new Healing the Healers program is also a great success. Nurses, doctors, caregivers can get away to Ilan-Lael, a place where nature and art fill their day … and they are transformed.

Will Ilan-Lael continue to be a place of creation, a studio alive with the sound of blacksmiths hammering, wood being carved, and the like?

I strongly believe it will happen. I don’t know if Ilan-Lael will be doing it, or an individual artist or artists that come in and stay will take the lead, but the studios are a great resource and should not be just part of a tour. We are connected to a community of artists that has grown up around my parents. Back when I was growing up here, Julian was a lot of cowboys and farmers. There were some artists, of course, but now many artists and authors have congregated here. It’s not all because of my parents, but they were an influence.

Your passion is sustainability. What will best sustain ILF in the years to come?

Our biggest need is to establish an endowment. It will help ensure that the foundation has a sound financial footing, we won’t be challenged to make payroll and maintenance needs, and that revenue from activities and programs need not be used to cover expenses, but will help fund new programs and ideas. We have received important grants over the years and have many loyal, very generous supporters, for which we’re grateful. Now it’s time to have a strong endowment.

The Ilan-Lael Foundation grew up after we lost so much in the Cedar Fire. We could not have rebuilt without the help of others, and the foundation allowed my parents to envision a future when Ilan-Lael won’t be sold after their lifetimes, but will always serve and belong to the community.

I remember climbing an amazing black oak here when I was young. Its branches spread wide: I think dad used it to create the tree drawing in Ilan-Lael’s logo. It was lost in the Cedar Fire, but I know its roots still run deep in a different way, and the tree image sustains us. We are connected to the earth, but Ilan-Lael will always reach for the sky.

PHOTO: Drew Hubbell bent and welded trusses for the sculpture studio in 1982. Courtesy of Steven and Nancy Cline