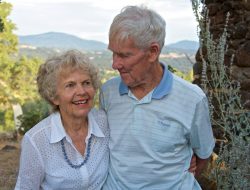 James and Anne Hubbell are the builders of Ilan-Lael and founders of the Ilan-Lael Foundation. James is an artist and architectural designer and owner of Hubbell Studios in Julian, CA.  Anne, his wife, is an educator, musician, and dancer. They married in 1958 and bought 10 acres of property to build a home with their own hands.  That home provided an opportunity for James to develop his architectural and artistic expression, and over 60 years grew into an art compound of 13 structures, gardens, and undisturbed native landscapes that are known as Ilan-Lael.  James and Anne are our artists-in-residence.  James serves as President of the Ilan-Lael Foundation and Anne also serves on the Board.  They have four sons, and sixteen grandchildren and great-grandchildren who are active in the Foundation and its activities. The Hubbell’s inspire and guide the Foundation to carry on the work they began long ago, to value nature and art, and use the process of making art to encourage creative approaches to bettering our world. 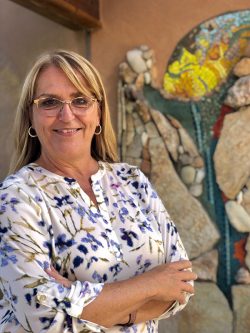 Marianne met James Hubbell when she made a documentary for PBS in 2002 called “Eye of the Beholder.” But it was the Cedar Fire that came the year after that cemented the friendship. “We reached out to Jim to ask if we (husband Michael Gerdes, a photographer) could come and document the destruction. Jim invited us to join the family as they were first seeing the fire’s destruction. It was terrible, but at the same time so moving, because he was already talking of the experience as awe-filled.” Soon after, they became collaborators charting a path for the future of the property using the non-profit Ilan-Lael Foundation. Marianne has been Executive Director of the Ilan-Lael Foundation for 14 years, helping with transition of the private home and art studio into a public resource. She spearheaded the Ilan-Lael Center capital expansion which resulted in a new and uniquely Hubbell-designed space for events, workshops, meetings, and retreats. She also shares the Foundation’s passion for art and nature as expressed by James and Anne Hubbell, and which is made real through programs, workshops, and events that encourage people to explore their own creative inclinations. She’s continued making films too, the latest, “Between Heaven and Earth” about the life and accomplishments of James Hubbell, is showing in film festival across the U.S. and around the world. “I have the most amazing opportunity to work with one of the most creative souls on the planet,” says Marianne. “I learn from him every day, and I feel so fortunate to be able to help Jim realize some of his dreams, too.” 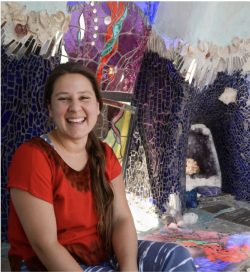 Laurel began working at Ilan-Lael as a mosaic tile artist for Hubbell Studios. But it wasn’t long before her many other talents were put to work by James. You might see Laurel repairing the roof of a building, or waist-high in a hole shoveling dirt, or photographing the art and nature on the property, or helping out in the studio forge or stained glass studio. Her skills are multi-dimensional. But her favorite place is in the art archive where she’s served as the Ilan-Lael Foundation Archivist since 2018. She’s been tasked with organizing, cataloguing, and preserving the vast body of James’ work. Her efforts are vital for the long-term educational mission of the Foundation.

“It is exciting for me to use my background, skills and creativity to build this archive and come up with organizational methods to preserve and catalogue James’ extraordinary creations. I had not expected to fall in love with this type of work but I am so happy to be involved in the preservation of art; it is such a critical feature of the art world. I feel especially lucky to be the archivist for Jim’s stellar body of work “. Laurel’s can-do attitude makes her a valuable team player. “Hubbell Hill is a truly special environment because you have the opportunity to learn everything having to do with art, fabrication and construction. I never thought I would learn how to use as many tools as I have, and at this point it feels like there is nothing I can’t learn, but most of all I have adopted the ‘no fear’ attitude it takes to create and build; that is what I value the most from Jim” 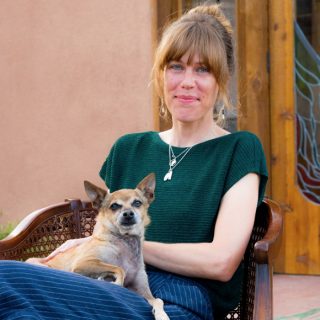 Emilie Ledeiu, Artist-In-Residence, Property Caretaker
Emilie has been part of the Hubbell community since 2004 when she volunteered to help in the aftermath of the 2003 Cedar Fire. Drawn to the idea of community engagement through art, she found a kindred spirit and mentor in James Hubbell. “We all know how trusting James can be (while encouraging one to do the same with themselves), and the next thing I knew, I was part of building out the massive mosaic pieces for the Briercrest restrooms and helping to teach at the Pacific Rim Park Tijuana project. All the while James referred to me as an artist, something I was barely calling myself.” This was a turning point that launched Emilie’s career as a mosaic artist, most notably with the Mural Arts Program of Philadelphia (MAP). She also continued working for James at the Pacific Rim Park in The Philippines and on mosaic installations for the Margaret A. Cargill Philanthropic Foundation in Minneapolis. In 2021 Emilie came to Ilan-Lael as the first artist-in-residence/caretaker. She has become a key foundation employee wearing many hats besides that of artist and caretaker. She teaches mosaic classes, leads tours, and oversees the daily upkeep on the Ilan-Lael property. “I’m lucky to consider Ilan-Lael as one of my many homes.” 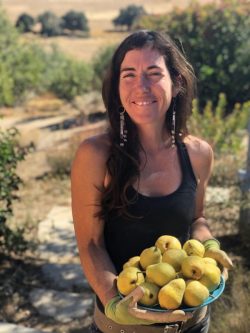 Mati Moon, Ilan-Lael’s gardener for the past two years, is not formally schooled in art, or gardening for that matter.  But she was raised by creative parents who encouraged her to express herself by using her hands.  “I do ceramics and photography, and I paint.  I’ve been working with India Ink which is an interesting challenge.”  She also leads Ilan-Lael’s garden work days and dry wreath workshops.  “ I find it a meditative practice to find something natural and sit with it.  It’s a quiet time often and I’m always surprised with what comes out.”  Her interest in James Hubbell go back 2002 to when she moved from Oregon to Julian into Camp Stevens, the Episcopal Church Camp which has several Hubbell art installations on its campus.   “I got to see Ilan-Lael before the Cedar fire with a group from Camp Stevens.  Jim gave us a tour and was talking about life and beauty and it immediately resonated with me.”  Her place at Camp Stevens put here in a key spot to help the Hubbell’s with the evacuation for the Cedar Fire, and then to help break ground on a new garden one year later.  “The Hubbell garden, I feel pretty fortunate to be here.  I’m given creative leeway with it and I work with a supportive community of artists.  Working with plants, being handed this opportunity to be creative with nature and to witness it, the garden does amazing things on its own.  I water it and shape it and stand back and watch it grow.  There’s a lot of symbolism in Jim’s work in nature.  The cycle of life and birth and death and the things we don’t really control.  Things are blooming right next to what’s dying.  The garden is symbolic in that way.” 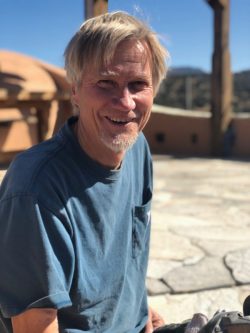 Dan Thoner has always had an eye for design.  “I was first inspired by Jim’s art in 1979 when I went to the Triton restaurant on College Avenue.  I was working as a carpenter because my father told me I could never make a living as an artist.” With all due respect, Dad was wrong.  Dan Thoner IS a fine artist and craftsman and graphic artist whose skills are now being employed for the care and maintenance of the Ilan-Lael’s buildings.  “The job here is a lot of woodwork maintenance, windows and doors need constant care and polishing.  And general maintenance and repairs on buildings that have been built over the past 60 years.  Jim is a great resource, having him around to ask questions of.”  Dan first met Jim in 2007 when he moved to Julian.  He brought some doors to show him, and Jim immediately asked if he would work for Hubbell Studios.  Dan’s first project was the chapel at Camp Stevens.  And it grew from there.  Dan worked on several doors over the years.  He built all the custom cabinetry and many of the doors in the Ilan-Lael Center.  He also maintains his own studio in Julian where he makes custom doors for clients.  Just this year, his design earned 2nd prize at the Design Wood Exhibit at the San Diego County Fair.  Dan turns 65 next year but has no plans to slow down.  “I’m not going to retire ever.  I will always keep my hands in making things, working with wood and glass.  Working at Ilan-Lael is my way of giving back by helping preserve the creative voice that spoke to me years ago when I first encountered Jim’s work.  It opened up a new world for me and rekindled the artistic curiosity to keep following my own creative path.”

Please use the form below if you have any questions for us!